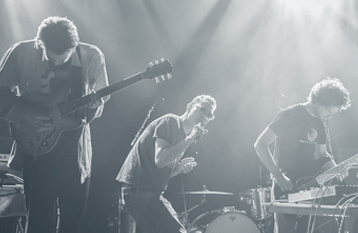 Alkaloid is experimental electronic musical project that allready has know many forms. It started out as a solo project initiated by Rob Kanters, seeking for non excisting bounderies between different musical genres. The collaboration with Tom Besuyen on vocals and David Van Gils on guitar/effects makes way for an intense and deep clubby atmosphere with lots of space for live soundscape improvisations with a foundation of vibrant subs and groovy beats.

At first Alkaloid mainly made it’s name in the international breakcore underground by touring together with the home-based Unfinished Monkey crew but Rob finds even breakcore too constricting and tries to shift those boundaries as well. The demo/EP in 2012 varies from peacefully flowing Dub, IDM and Garage permeated by psychedelic, filmic passages, that, through many spherical and stylistic shifts, often builds to an explosive and expressive postrock climax. Live the wall of sound was enforced by Thomas Van Den Reydt (Monomyth) or Barend Spaan.